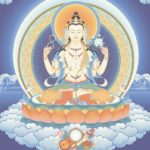 Recently, we concluded our first residential retreat, “The Bodhisattva Way”, led by my teacher, Baika Andrea Heaton, with our Affiliated Mountain Sanghas, Mt Diablo Zen Group of Pleasant Hill, California, and Facing the Mountain Zen Group of Reno, Nevada. This is a written version of my talk on compassion:

Many years ago, before I retired from full time work as a Certified Nurse-Midwife, I was having trouble with burn-out, and I talked to my teacher, Grace, about it. I found myself feeling annoyed and impatient with patients, and I felt very bad about it. I felt that I was betraying my own standards of good care, and nothing that I had tried was helping. Guilt, shame, resolve, determination, re-commitment – nothing helped.

Grace said, “Become compassion!”  I had no idea what she meant. So I had this koan before me, as I went through my days, seeing one patient after another, in increments of 10, 20, 30 minutes.  10 hours a day, 5 days a week, with an hour commute each way.

Before I finish that story, what the heck is compassion, anyway? It’s a word that we use commonly, so commonly that we don’t even think about the meaning. We just assume that we know what it means. We think of it as a feeling, like feeling sympathy for someone, or feeling sorry for them, or suffering with them, or even taking on their suffering.

It does not mean “suffering with”, or taking on the suffering of another. It means opening a capacity to abide with suffering – my own, and that of others. To be a bodhisattva of compassion, I first have to grow the ability to be with my own suffering. First of all, I have to know that I am suffering. This we learn on the cushion, by attending to everything that arises. In zazen, we sit down, and everything arises – all our obsessions, all our fears, our mental gymnastics, all our hopes, all our anguish – all our suffering. Maybe for the first time, we notice that we are suffering, and we sit with it, instead of reacting.

We just sit there, and breathe – with our suffering. No longer separate from our suffering, no longer trying to escape it, or manage it, or push it away. And we begin, in noticing our own suffering, to notice that others are suffering too, and that everyone is suffering. I think it was Norman Fischer, former abbot of San Francisco Zen Center, who said that another word for enlightenment is intimacy. So this is a story about how our suffering becomes our liberation, through the intimacy of awareness.

Joko Beck has a version of the Bodhisattva Vows that I really like:

Caught in the self-centered dream—only suffering

Each moment life as it is, the only teacher

Being just this moment, compassion’s way

So one day, I was at the office, and I found myself in an exam room with a patient, and I started to feel angry at the patient, who had a problem. But then, with some zazen under my belt, I suddenly realized, “Oh, I’m suffering! This hurts!” I realized that my burn-out, my annoyance, my impatience – were all suffering. What an amazing realization! Then I realized, “Oh, she’s suffering! We’re both in this room together, just two people, with a problem, and we’re both suffering!”

Everything softened. My anger melted, my resistance, my aversion, my forcing myself to be professionally kind, all melted. Suddenly, there was the intimacy of shared suffering. In that room, there was just compassion. I could listen to the patient calmly and with attention, and for that brief time, I understood Grace’s instruction, “Become compassion”.

In conclusion, I offer this invocation to Avalokitesvara, Bodhisattva of Compassion:

We invoke your name, Avalokitesvara

You know how to listen to understand

We will sit and listen without any prejudice

We will sit and listen without judging or reacting

We will sit and listen in order to understand

We know that just by listening deeply, we already alleviate a great deal of pain and suffering in the other person.